Edinburgh Synchro took 19 swimmers to the Scottish National Age Groups in Drumchapel at the weekend and came away with at least one medal per swimmer and the Glasgow Sports Council Trophy for Top Scottish Club 2017.

Day one consisted mainly of the figures competition, as figure results make up 50% of almost all the routine scores. In the 12&under category Mae came 3rd in Scotland.

Only the top six Scottish swimmers in the figures competition are able to swim solos and duets. Niamh qualified to swim her 13/14/15 solo. Lucy & Eliza and Natalia & Torri qualified for the 12&under duet. Cale & Niamh and Baylee & Kiku qualified for the 13/14/15 duet. They all swam well and Cale & Niamh came a very close second, pulling back an amazing four point figures deficit against the leaders.

Day two began with the Lucy and Mae qualifying for the 12&under solos and Ailsa & Aman competing in the Junior duet category, for which they received a silver medal. The afternoon saw the team competitions, and Edinburgh had teams entered in each age group and in the Competitive Combo. The 12&unders and Juniors recieved gold medals for their performances. The 13/14/15 team won the silver medal and the Competitive Combo the bronze. 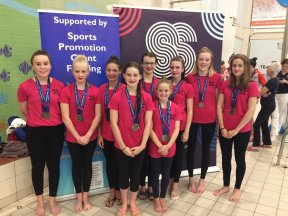 The event was topped off by the awarding of the trophy for the Top Scottish Club, which is calculated by adding together club scores from the whole event. Edinburgh won by just over a hundred points.

Congratulations to the whole team and thank you to all the coaches and volunteers who helped make Edinburgh Top Scottish Club 2017.

More photos from the weekend…. 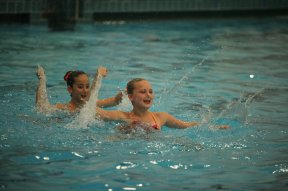 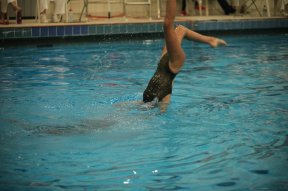