It was the second Edinburgh Synchro Awards Night and Disco on Friday 18 January.

Almost all the club came along and it was a wonderful night. The raffle was drawn and there was an amazing array of prizes. In all £196 was raised for the club.

All swimmers who passed a grade during the year received a certificate, designed beautifully by Makiko.

After some dancing our team Star Awards were presented by the coach of each team. They went to:
Beginners – Nicole
Grade 0/1 – Shonagh
Grade 2+ – Eilidh
12&under – Lucy
13-15 – Natalia
Junior – Aman & Ailsa 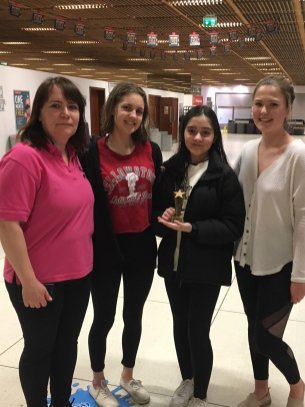 Each year the swimmers vote to decide who receives the Coach of the Year Quaich and who will be Club Captain for the forthcoming year. Cath won the Quaich and Niamh the Club Captain’s top. Congratulations to all our trophy winners and to all swimmers, coaches and volunteers for another amazing year at the club. Thank you all for coming.